Refugees in Utrecht explore the city through selfie-treasure hunt

On Tuesday December 1, a group of refugees from the Utrecht refugee center played a selfie-treasure hunt to playfully explore the city. This is the second time the game has been played with refugees. The selfie-treasure hunt is developed by GAP PhD candidates Stephanie de Smale and Sjors Martens, and research master students Nico Lopez Coombs and Arash Ghajarjazi. The main objective of the game was to create a safe and playful way for this vulnerable group to explore the city.

The neighbourhood as playground

The first play test took place in Lombok, since the refugees were staying in the Beatrix building in the Jaarbeurs. However, the present group is staying in Kanaleneiland, so this time the game’s location was Park Transwijk. Tokens were hidden in the park and hints were given via a photomap. The objective was to collect as many team selfies with the tokens, using their own phones. Points were allocated to the selfies, and the team with the most points won the game. 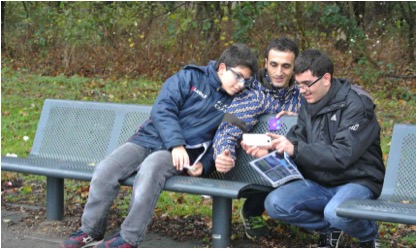 Selfies as digital memory
During the game, players are experiencing the neighbourhood through the lens of play. It provides the opportunity for this vulnerable group to explore the city while at the same time having fun. After the game, players still have the selfies stored in their phones, making these pictures a digital souvenir of a positive memory. 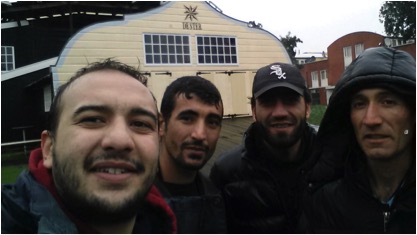 Playing in other cities
This is the second time this selfie-treasure hunt was played, and 32 refugees have participated so far. In 2016, the game will be played in Belgium in collaboration with the University of Liège. However, the researchers hope to play the game in other cities as well.

If you have suggestions for other locations to play the selfie-treasure hunt, or want to join the next run, please contact Stephanie de Smale.