The Utrecht Game Lab (UGamelab) is a small research group comprising several GAP staff members as well as students interested in studying games and play from a critical making perspective. We believe that, to truly understand both games and related phenomena such as gamification, some knowledge of their technical make-up is required.

A more detailed documentation of our ongoing projects, including an online repository of the corresponding source files for further variation and annotation, is currently being created. In the meantime, you can find a brief overview with executables below; for access to the source files, please get in touch via email.

Our most important initiative at the moment is aimed at using Analytical Game Design to ‘make data(sets) playable’. Analyzing datasets is becoming an increasingly relevant 21st-century skill but also a  cultural techniqueCf. e.g. Winthrop-Young, Geoffrey. 2013. “Cultural Techniques: Preliminary Remarks.” Theory, Culture & Society 30 (6): 3–19. in a broader sense; in the process, data visualizations are more and more firmly embedded in mainstream discourse. Yet, through the de-facto standardization of tools like Gephi and their layout algorithms, the primacy of visuality in understanding data is reinforced, which excludes other ways of looking at data, such as through the lens of play. 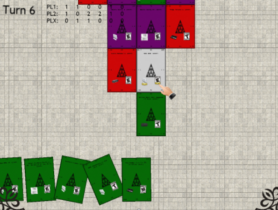 We design games and game-like vignettes to analyze particular datasets, at the moment primarily for use in classroom and museum contexts. Our first projects is a collectible card game (CCG) based on a dataset combining Metacritic and sales data on the video game industry, that is being used e.g. in the BA course Computer Games in Context. Both a physical version (created using Nandeck) and a prototype for a digital version (created using Game Maker Studio 2) exist so far. The prototype is freely accessible at https://bit.ly/2t5adjq; it currently defaults to two players (any number is technically possible) and documentation will soon be available via this site.  The slides for a symposium presentation on the project from March 2018 are available here.

Building on this experience, we are currently exploring a more specialized dataset on the Dutch game industry, created by the Netherlands Institute for Sound and Vision Beeld en Geluid, via game prototypes; more information on the prototypes and the theoretical context will be available here shortly.

In order to explore the semantic and mechanical boundaries of a game, we remixed and de-familiarized the iconic 1979 Atari Game Asteroids. Each remix is driven by a particular Analytical Game Design heuristic, e.g.

Executables of more than 20 remixes (including one APK file to be installed on Android tablets) are available here. For access to the source files, workshop requests or to get involved otherwise, please get in touch via email.