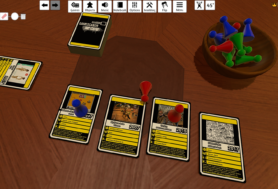 In this workshop we explore the role game co-creation can play in studying national game identities. By using the “making data playable” approach (see below), participants of this workshop will playfully engage with and interpret game-historical datasets from different cultural contexts. This will help to lay bare different patterns in national game histories beyond the often dominant US/Japanese perspectives, provides insights into the similarities but also discrepancies between these oftentimes marginalized and/or ignored histories, and explores how these can serve as a repository for cultural identity formation.

To participate, please submit a short motivational statement (approx. 200 words) indicating your specific interests as well as your own professional background and personal game-historical experiences to s.werning@uu.nl until 14th February 2020. Participants will be notified of their acceptance by 18th February (all applicants need to be registered participant of DiGRA 2020).

In recent years, we have witnessed an increasing interest in the cultural specificities of game creation as an important pillar of more local contemporary digital economies and cultural practices. For instance, game scholarship gradually acknowledges local and national gaming contexts beyond those emphasized in most industry-based histories (e.g. Wolf 2015; Liboriussen & Martin 2016; Mukherjee 2017; Švelch 2018; Penix-Tadsen 2019). Emergent initiatives like indigenous (board) game design (LaPensée 2016) suggest a synergetic relationship between game design and cultural identity formation, but even on a larger, national scale we can see efforts to create national histories of games, i.e. through processes of canonization and dedicated exhibitions (Barwick et al 2011; Kultima & Peltokangas 2017; Glas & Van Vught 2019).
All these national initiatives have resulted in large datasets that reflect local gaming identities over past decades. Profiting from these rich datasets, this workshop uses the modality of play to stimulate interpretations of the data. After designing a deck of cards using different parameters in aforementioned datasets, we invite participants to explore different card game mechanics to see how these highlight different patterns of local game histories.

We want to explore how game co-creation can facilitate playful engagement with these collections as a means of harnessing different game histories to create an alternative site for national (and potentially regional or transnational) cultural identity formation. We break down this overarching goal into three constitutive objectives:
– Rethink what a national game culture (e.g. a quintessentially ‘German’, ‘Canadian’, or ‘Brazilian’ game) might entail and look like in the corpus, as well as how developers can benefit from tentatively reconnecting with (their) national game histories. Such a focus on national gaming histories might help “to rhetorically challenge and unmask ‘traditional histories’ and master narratives” (Suominen 2017, 552).
– Explore how game co-creation can be used to actively and creatively engage players with the preservation and canonization efforts occurring in their countries (e.g. Netherlands, Germany, France, Finland, Slovenia etc.), which are currently only accessed by a comparatively small group of people.
– Interpret the historiographical datasets through the lens of game prototypes. This includes exposing audiences to other national game histories than their own, discovering commonalities and significant differences. We will consider how such convergent game histories have been reflected in contemporary digital games, as well as how playfully engaging with these experiences can “trickle up” (Wo et al. 2019) from popular into mainstream culture, fostering collective identity formation.
A final prospective outcome will be to discuss how the concept, methodology and existing group of partners can be combined to formulate joint project proposals, e.g. with a specific focus on games in shared European histories and identity (within the Horizon Europe framework).

We will expand on the ‘making data playable’ approach by scraping sample corpora from Gamebase64, a database of games produced for the Commodore 64 computer in the 1980s/early 90s in several languages (Dutch, Italian, Spanish, etc.). Transcoding these into playing cards as a platform (Altice 2014) helps to explore the notion of parallel/alternative game histories (Glas, van Vught & Werning 2020). The workshop presents a ‘playful’ methodology, drawing on “critical modification” (Loring-Albright 2015) and “analytical game design” (Werning 2019; 2020), and explores the socially transformative potential of ‘making data playable’. Ideally, the workshop would take up five hours, including a one-hour break. After establishing the premise and theoretical context, we introduce and playtest a sample card game. After this:
• a) Each group creates one or more ‘critical modifications’ of the sample game. Apart from modifying the rules or adding components, participants will learn to use playing card creation tools Nandeck and/or Squib to create new cards from the available datasets.
• b) Each group modifies a prototype created by a different group, attempting to reference, comment on and/or rephrase the procedural rhetoric built into that prototype.
• c) Finally, we compare the game prototypes as part of an ongoing ‘discourse’ on game histories, canonization and the role of games in European cultural identity. We outline how they could be introduced into “subcultures promot[ing] Do-It-Yourself (DIY) media production” (Jenkins 2014) like Boardgamegeek (reference board game jam examples) to help create outreach and realize the socially transformative potential of the method.

We explicitly welcome participants from countries with small/emerging game industries. Thus, we aim to maximize the diversity within the groups to reflect different national gaming experiences and cultures; the focus lies on how the proposed playful method can facilitate harnessing game history as a site for national and trans-national cultural identity formation.
The maximum group size for the workshop will be between 20 and 24. During the co-creation sessions, participants will work in teams of four to five members. Pre-selection will be based on the participants’ previous experience with game historiography (if applicable) as well as a short pitch (max. 150 words) that explains their interest in the topic, both for the workshop and (ideally) beyond.

BACKGROUND OF THE ORGANIZERS

In this workshop we combine the expertise of scholars, who have been working and publishing on game preservation, game historiography and critical game-making as a research and teaching heuristic. The workshop follows up on a contribution to the “Teaching Game Studies” pre-conference at DiGRA 2019, in which we discussed the use of game design in a classroom setting to investigate one particular game canon. Moreover, we draw on our existing connections to various European game museums and collections.