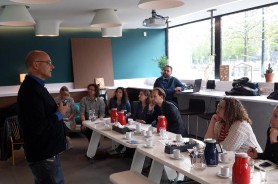 On 22 May, a Friday afternoon, the Nest, the cradle of entrepreneurship at the Heidelberglaan, was crowded. In a ‘Science Meets Business’ seminar researchers from the focus area Game Research (Utrecht University) and various market participants gathered to discuss game research and how they could cooperate in this field. Present were large serious game companies from the Netherlands and researchers Joost Raessens, Remco Veltkamp, Stefan Werning, and Robbert Jan Beun. There are several target groups for serious games. Think of games for education, government and organization, games for health, sustainability, smart cities, conflicts and safety. The Netherlands is globally renowned for its production of and research into serious games, as argued by Christel van Grinsven (Dutch Game Garden) and Joost Raessens in the recently published book Video Games Around the World (MIT Press, 2015). In the world of academia, serious games are called persuasive games, i.e. games aiming to change attitudes and behaviour.

Research into the functioning of persuasive games

One of the most important questions is: do these games really work? If that can be ascertained, reliable quality assessments can be made. This would be useful, for instance, with regard to education games and apps for (primary) schools, many of which are already operational. A school would then be able to make grounded decisions.
To clarify whether and how persuasive games and apps function, Utrecht University cooperates with companies. Within the NWO-research programme ‘Persuasive Gaming’, researchers such as Joost Raessens chart best practices and produce models that can predict the success of newly developed games.

The afternoon was concluded with a lively discussion. Representatives of game companies argued they would benefit from research taking up shorter cycles: “We want interim results every two months, not after four years.” Next to that, creative designers desire predictability, i.e. research into whether the apps or games really work. For the researchers it is preferable if companies present demands collectively. What does the market actually require and how can researchers meet that demand?
It is striking that considerable fragmentation exists among both parties (game companies and researchers). Closer cooperation is required within and between universities. On that note, the focus area Game Research at Utrecht University fulfils a pioneering role. Contrariwise, the landscape of media companies is too dispersed for many researchers to work with. Many small parties exist, each with their own area of expertise. This makes it hard to determine who to appeal to for what. The ultimate conclusion that it would be better if both sides cooperated more is shared by all. It is easier to apply for EU2020-projects in unison but also when approaching larger market participants such as ING, Shell, Alliander and, for instance, Philips. These are after all companies that do not only come with concrete demands, but also do have the funds to finance research.